As of Sunday, Aug. 30, 2009, the Yosemite fire was burning out of control along Highway 120 shut as the flames spread.
The photos to follow were taken from the roadway that runs through the Tunnel View, across the valley, to the fires. From the areas where we stopped to watch, we could actually see sparks and random burns that had jumped the main fire area. The fires lit up the sky.
To follow is an copy of some of the reports we read.
MARIPOSA COUNTY—A state of emergency was declared Friday night for Mariposa County, where a nearly 4.1-square-mile fire continued to burn in Yosemite National Park.
Fire crews, which include more than 20 firefighters from Stanislaus County, set the blaze Wednesday as a prescribed burn, but it quickly spread beyond the planned 90 acres. By Saturday, the Big Meadow fire had grown to more than 3,500 acres and was about 30 percent contained, officials reported.
Park officials closed a campground and a portion of Highway 120, anticipating that the fire would spread north toward Tioga Road, the highest route through the Sierra. The number of firefighters was expected to double over the weekend to 1,000.
A state of emergency Friday night.
The Mariposa County Sheriff's Department ordered guests and staff at the Yosemite View Lodge, just outside the park's western gate, to evacuate Friday. People without lodging were offered beds at a Mariposa shelter staffed by the Red Cross. (This lodge was less than 3 miles from where we were staying, while at the park, and it was rumored that our campground closed as well.)
The communities of Foresta and El Portal have been evacuated. The fire and firefighting efforts have shut down some roads, trails and campgrounds.
The Crane Flat Campground and the Tamarack Flat Campground are closed. Also closed is the Big Oak Flat Road at Crane Flat south to the junction of El Portal Road.
Additionally, Fire-related delays were expected on Highway 140.
We were told by several Rangers at the Park that they weren't sure how the fire came to burn out of control— A sudden wind shift may have caused it to jump its original boundaries.
As of the 30th, it was rumored that the fires have affected 120 to 150 people.
The Fire was not 100% contained until 09 September, 2009.
Read More 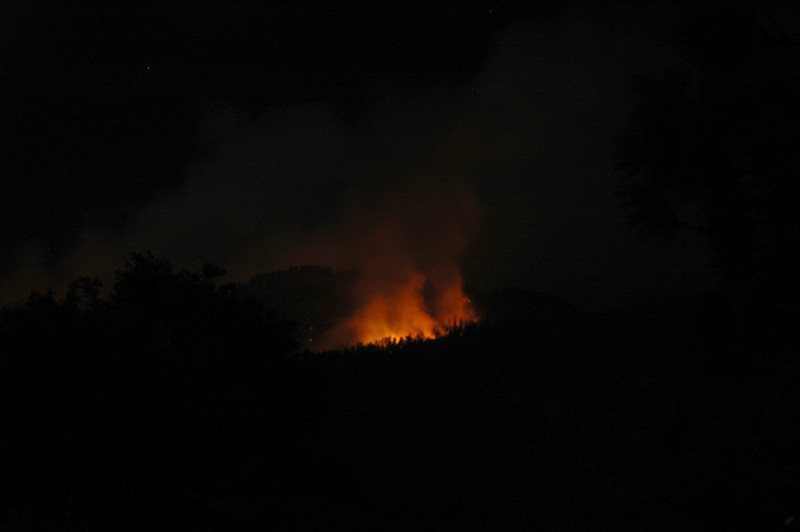 The fires on Rt. 120, above Tioga Pass, in Yosemite, as viewed by the roadway just outside of the Tunnel View. The fires were still spreading at this point.